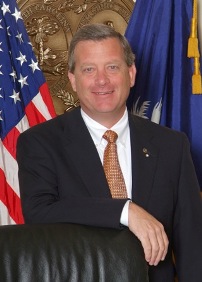 Second District: All of Allendale, Barnwell, Hampton, Jasper and Lexington, as well as parts of Aiken, Beaufort, Calhoun, Colleton, Orangeburg and Richland.

David Wright was elected to the South Carolina Public Service Commission from the Second Congressional District in a special session of the S.C. General Assembly on March 3, 2004.  He served as one of seven elected commissioners of the SCPSC.

During his time as a Commissioner, David accepted active roles in many phases of commission activities locally, regionally and nationally.

In November 2011 in St. Louis, David was elected by his peers around the country to serve as President of the National Association of Regulatory Utility Commissioners (NARUC) for the 2011-2012 term.  As President, David also served as a member of NARUC's Executive Committee and the NARUC Board of Directors.  He also served on the Electricity Committee, the Washington Action Committee, and was Chairman of NARUC's Subcommittee on Nuclear Issues and Waste Disposal.

David is a past President of the Southeastern Association of Regulatory Utility Commissioners (SEARUC), serving as President in 2008-2009.

A colon cancer survivor, David is an advocate for cancer awareness and is frequently asked to share his message with groups around the state.  David is also a member of the Leadership Council for the Cancer Centers at the University of South Carolina (CCUSC).

Prior to his election to the PSC, David had been self-employed for more than 25 years, having owned and/or operated several retail, commercial and professional services businesses.  He has an extensive background in retail, commercial and political advertising and public relations, and has worked as a strategic consultant in all areas.  David also has a strong background in planning and staging events.  Adding to his broad and varied background, David has his real estate license and is a licensed auctioneer in South Carolina.

-Governor's Appointee to the Southern Regional Education Board

- "The Order of the Palmetto" Recipient, 1996 from Governor David Beasley

-"Outstanding Young American" Award Recipient in the field of Community Service for SC, 1987

-"Legislator of the Year Award" Recipient from the SC Chapter of the National Federation of the Blind for work on Braille literacy legislation, 1992

-"ARC Award" from the Association of Retarded Citizens for work on legislation and initiatives promoting early intervention and mainstreaming programs for retarded children, 1991

-"Legislator of the Year" from the Irmo Fire Distrcit, 1994

-"Legislator of the Year" from the SC Vocational Directions, 1995